Reposted in full with permission of the author

Killing the unscientific climate scare before it destroys our prosperity and robs us of our health, security, and freedom is one of the most important challenges facing conservatives in 2023. To do this will require employing all the methods used by the radical left to create climate panic in the first place.

Many of the strategies so successfully employed by “progressives,” including climate alarmists, are well laid out in Rules for Radicals, the 1971 book by community activist Saul Alinsky. All conservatives would do well to re-read Alinsky’s classic to better appreciate how the left so effectively highjacked most of our institutions.

An even more urgent reason to study the book is to learn how to successfully fight back and win.

When Alinsky wrote the book, the left was mostly on the outside looking at a conservative-dominated establishment. Now, the situation is reversed and, while Alinsky would be rolling over in his grave if he knew this, we at International Climate Science Coalition — Canada (ICSC — Canada) effectively employed his “rules” to triumph over climate alarmism in last October’s municipal election in the City of Ottawa, Canada’s national capital. Because many of our activities and the ultimate victory for a more realistic approach to climate change are transferable to other jurisdictions across Canada and the U.S., let’s discuss what we did and the results.

This past July, city councillor and climate activist Catherine McKenney had what appeared to be an insurmountable lead in the race for mayor of Ottawa. 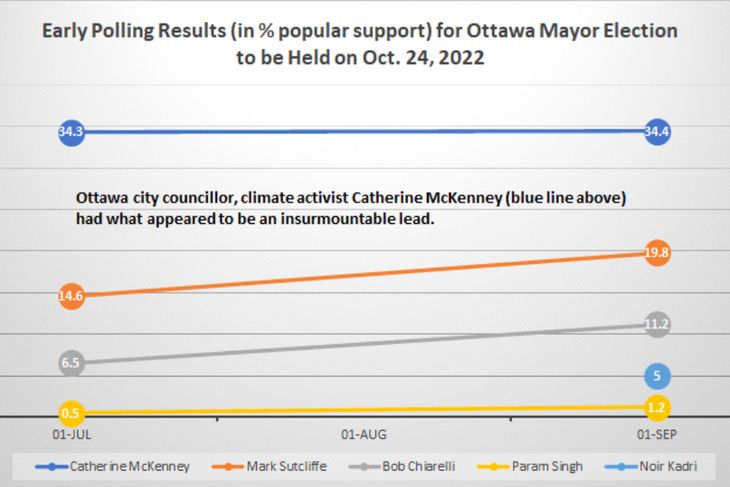 This was a big problem since not only was McKenney primarily responsible for the city’s endorsement of the Fossil Fuel Non-proliferation Treaty that has infected 74 cities and subnational governments across the world, including five in California (Los Angeles, Hayward, Richmond, Santa Ana, and Sebastopol), but McKenney also supported the City of Ottawa’s $57.4 billion climate and energy plans, which included a phase-out of all uses of oil and natural gas. Instead, the city would supposedly be powered by so-called green energy, including 14 square miles of solar panels, a 161,485% increase over today’s levels, and an incredible 710 industrial wind turbines each at least as tall as the Statue of Liberty. Power storage would be provided by 122 large shipping containers of lithium batteries.

In contrast to Ottawa’s overarching vision, as defined in its Climate Change Master Plan, to transition “Ottawa to a clean, renewable and resilient city by 2050,” its plans would instead transform the capital into a polluted, fragile and bankrupt city suffering from regular blackouts and business failures. Few people would voluntarily choose to live here.

ICSC — Canada responded by publicizing, via articles, Zoom presentations, podcasts, radio, and TV, the serious flaws in Ottawa’s plans. Earlier in the year, we had written an eighty-three-page report about the city’s plans titled, “A CAUTIONARY TALE FOR GOVERNMENTS AROUND THE WORLD — The City of Ottawa’s Climate Change Master Plan: Infeasible and Damaging to Ottawans, the Environment and Human Rights.”

When it was announced that the first four mayoral candidate debates would be chaired by climate activists and would focus on “climate justice,” we intensified our publicizing of the report. ICSC — Canada did not support or oppose any candidate directly. Instead, we trusted the intelligence of Ottawa voters to come to their own conclusions about what electing mayor someone who supported such extreme climate plans would mean for the city.

Employing Alinsky’s “rules,” we also coordinated volunteers to forcefully speak out at the mayoral debates about the infeasibility and threat posed by Ottawa’s plans. So, where did ICSC — Canada find the brave, knowledgeable and motivated volunteers to do this? It was primarily through the Ottawa Chapter of the seven-and-a-half-year-old freedom activist group Action4Canada, which is setting up chapters in towns and cities across Canada. Its goal is to educate, equip, empower, and mobilize citizens who then meet with their local elected officials to discuss issues of concern, apply pressure, and effectively create change. This impressive volunteer-run organization explains on its website: “Action4Canada is a grassroots movement reaching out to millions of Canadians and UNITING our voices in opposition to the destructive policies tearing at the fabric of this nation.”

I first met with Action4Canada founder Tanya Gaw in July and gave a Zoom presentation to the organization’s Chapter Leaders. After hearing the presentation, Tanya was willing to partner with ICSC — Canada to carry out our plan to challenge elected officials on the devastating financial, energy security, moral, and ethical implications of their climate plans as well as the lack of scientific evidence to support the climate scare.

After educating the Action4Canada volunteers about climate and energy, ICSC — Canada worked with each member of our team to assemble revealing questions to be asked during the public Q&A periods at the debates. Like ICSC — Canada, the Action4Canada volunteers did not support or oppose any candidate in their questions, focusing instead on the infeasibility, impracticality, and dangers of the city’s plans.

The results were amazing: almost all our volunteers were able to get to the microphone during the debates and about half of the questions from the audience in the first three debates came from our team. Our volunteers also handed out hundreds of ICSC — Canada fliers at the debates, much to the consternation of local climate activists. I am sure the organizers didn’t know what hit them.

Apparently, in response, the climate activist organizers decided to cancel open questions from the public in the fourth debate, allowing only questions they selected from those submitted in advance by the public. Questions chosen would then be posed by a person chosen by the organizers. Not surprisingly, none of the questions submitted in advance from ICSC — Canada and Action4Canada volunteers passed the organizer’s screening. ICSC — Canada responded by highlighting the censorship in our handouts and other communications in subsequent debates.

The most impactful moment in the public sessions came when Action4Canada Ottawa Chapter Lead Danielle Mailhot asked what meeting attendees later called “the atom bomb question.” Most of the candidates who responded, McKenney included, completely failed in their answers to Danielle’s question about the ethics of electrifying the city using cobalt mined by children in the Congo. ICSC — Canada broadly publicized all the questions our team asked, including those censored out by Rogers Community TV, which was tasked to cover the election debates and the candidates’ responses.

Leading conservative strategist Joseph Ben-Ami of Ditchley Public Affairs said that our actions played a significant role in the election.

And the outcome? McKenney lost.

The undecided, which is the green line in the graph below, and many supporters of other candidates apparently switched to the more moderate Mark Sutcliffe to make sure McKenney did not win. So, Sutcliffe suddenly jumped up to over 50% of the votes and the VICTORY.

To watch more of our brave volunteers actually in action in the Ottawa election and to understand how we employed Alinsky’s “rules” to educate the public about the threat posed by the City’s plans, please click here.

ICSC — Canada is now ready to expand this project to other municipalities across Canada. And we are pleased to discover that, once again, it is courageous Action4Canada volunteers who will help ICSC — Canada replicate our success in Ottawa nationwide.

If all this worked in left-leaning, dictatorial Canada, why not in “the land of the free and the home of the brave”?

Concerned citizens from both sides of the border are encouraged to complete the short form on our website to tell us about the climate alarmist threats they face in their own municipalities. We will then determine if we can help you too!

The real crisis we face is not climate change; it is climate change policy that threatens to destroy what previous generations fought to build and preserve. Thank God they had the courage, strength, and intelligence to win their wars. We now have our own conflicts, the climate war being one of the most threatening. Let’s win it!