Originally posted by Protect the Harvest

MAN, YOU HAVE A PROBLEM – GRIZZLY BEAR BEHAVIOR IN WYOMING IS A REFLECTION

Are You Afraid to Let Your Children Play Outside?

This is what life is like for ranchers in Wyoming who have been subjected to ineffective Federal Grizzly Bear policies.

It is clear that the federal government, as well as environmentalist groups that influence policy, have not learned from past mistakes. The Grizzly bear issue in Wyoming is simply a mirror of a larger problem. The actions of man have upset environmental balance, not just in Wyoming but in other areas of the country. Over the last number of years, there have been many issues where the over protection of one species has unbalanced the ecosystem, leading to the devastation of other species and the development of unnatural behaviors. These unnatural behaviors of grizzly bears and wolves are being witnessed by ranchers due to the killing and maiming livestock for sport instead of for food.
These “protections” are put into place without the consideration of proper balance. In the name of conservation humans have stepped into the equation without considering their own part in the ecosystem. Man has always been a part of the natural ecosystem by controlling apex predators and providing balance. History has clearly shown this and the proof is the stewardship and balance of man in nature with the native peoples that inhabited North America before the arrival of Europeans. 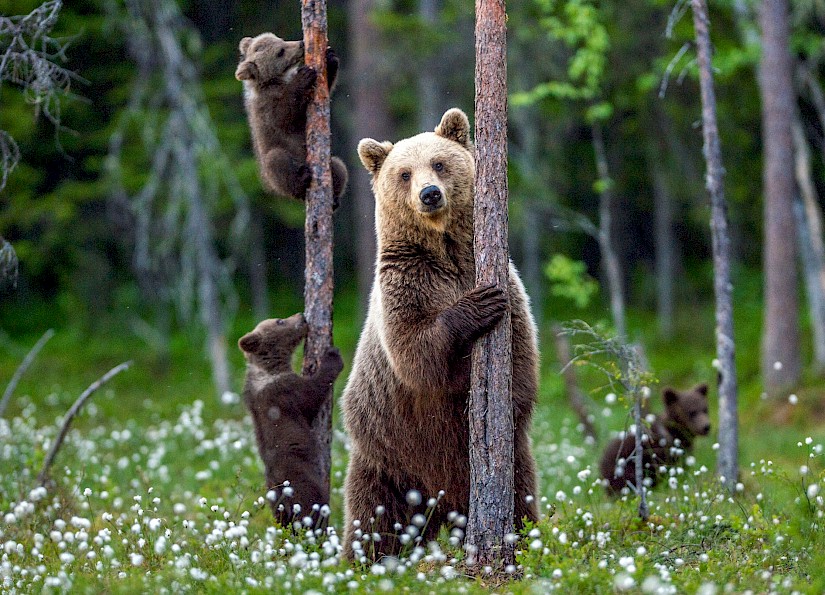 The sealion issue on the west coast is just one example of how “protection” goes too far and creates further imbalance and unnatural behaviors. Soon after the California sea lion became protected, their numbers skyrocketed. This decimated the salmon population impacting other endangered species that relied on them, including the orca. The exploding sea lion population discovered fish ladders on the Columbia River and its tributaries. The sealions that discovered the easy meal then taught others. They also started engaging in unnatural behaviors of spree killing at the fish ladders. All this has added up to sealions migrating and remaining in fresh-water areas where they do not belong, further wiping out salmon runs.
Sea otters provide another example. Since being added to the endangered species list, and also with intervention, the population of sea otters has exploded. They are voracious eaters, and their population has now had devastating impact on shellfish, Dungeness crab, and sea urchins.

The reintroduction of wolves has become a big problem in Oregon, Idaho, Montana, Washington, California, Minnesota, and Wyoming. The Elk population in Yellowstone has decreased significantly since wolves were introduced.

In 1971, Congress passed the Wild Horse and Burro Act. The intent was to save an American icon: rangeland horses. For over two hundred years, those horses were managed by both native peoples and European settlers. The horses were used for transportation, military, Army Cavalry mounts, farming, hunting, livestock management, and as a food source. However, with interference of radical animal and environmental extremist groups, the federal government has been blocked from properly managing the horse populations at every turn. These “wild horse advocate” groups are continually striving to take human intervention out of the equation. Humans have always been part of the equation when it comes to horses on American rangelands. The result is a devastated ecosystem which is harming native wildlife and the horses themselves. Due to lack of feed and water resources horses on our American rangelands are dying from starvation and dehydration along with other native wildlife. The population of those horses is more than four times the number biologists and scientists recommend for a healthy, balanced and thriving ecosystem. American taxpayers are paying over $50,000,000 per year to board and feed over 50,000 rangeland horses which have been removed from the rangelands to protect their welfare. There is no end in sight with thousands more born every year.

Man, You Have a Problem

There are more species that can be listed as examples where intervention has caused harm, especially intervention where the commonsense approach of leaving humans in the picture is absent.
An article that clearly outlines the problems that arise was published in Scientific American and titled, “When One Protected Species Kills Another, What Are Conservationists to Do?”

“In a world where wildlife is threatened like never before in human history, the conservationist’s mission seems clear: work to stop wildlife from going extinct, and to recover populations that have declined to the brink of extinction. In general, protecting wildlife means reducing a species’ mortality by mitigating or eliminating threats. This has often been as simple as shielding or restoring a key habitat or removing a non-native species that competes for resources.
But in today’s increasingly disrupted natural environment, sometimes the biggest threat facing a species that conservationists are trying to protect and recover is … another species that conservationists are trying to protect and recover. When that happens, the solutions available to environmentalists and wildlife managers get complicated and messy very quickly. ‘One of the challenges that we face today in marine conservation is how to manage through success,’ says marine biologist Christopher Lowe, director of the Shark Lab at California State University Long Beach. ‘As populations recover they create new, unforeseen interactions that can often pit protected species against each other—even though many have historically interacted ecologically.’” 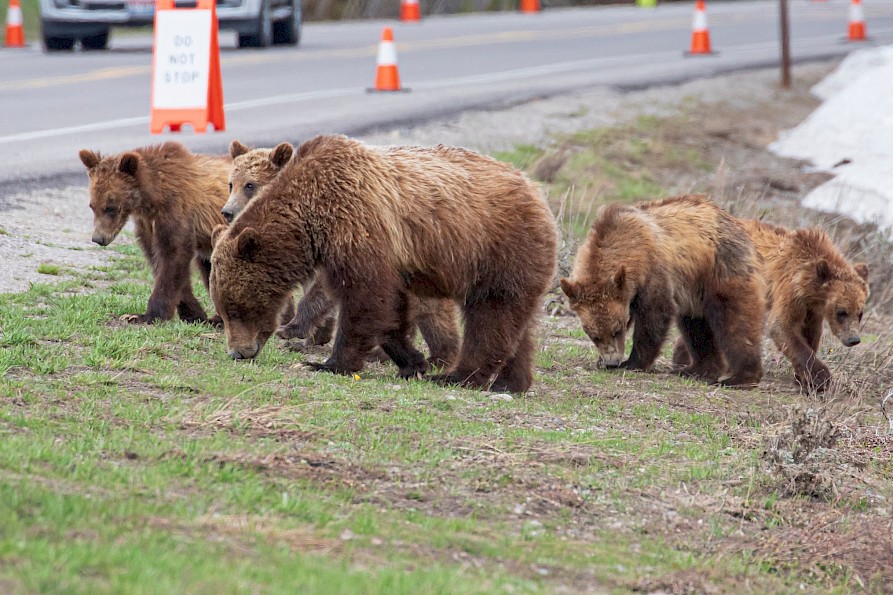 In 1975, the grizzly bear was listed as a threatened species. A recovery plan was developed in 1982, and revised in 1993. Since then the grizzly bear population has recovered and has outgrown the ecosystem in Yellowstone and other designated management areas. The ecosystem in Yellowstone simply cannot handle the bear population and so they are migrating to other areas and will continue to do so as pressure increases.

In 2014, regulations were changed allowing for the management of conflict bears. This regulation outlined by the US Fish and Wildlife Service allowed for taking of grizzly bears in self-defense or the defense of others. It also provided rules for dealing with nuisance bears. According to the regulation, “A grizzly bear constituting a demonstrable but non immediate threat to human safety or committing significant depredations to lawfully present livestock, crops, or beehives may be taken, but only if: (1) It has not been reasonably possible to eliminate such threat or depredation by live-capturing and releasing unharmed in a remote area the grizzly bear involved; and (2) The taking is done in a humane manner by authorized Federal, State, or Tribal authorities, and in accordance with current interagency guidelines covering the taking of such nuisance bears;.” 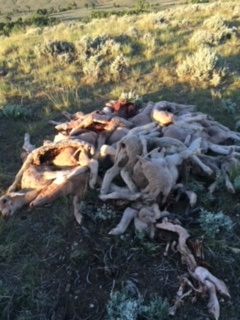 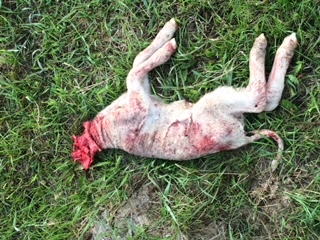 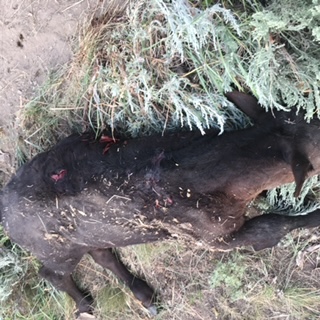 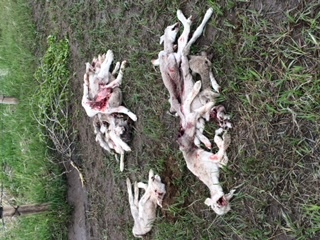 We spoke with some Wyoming ranchers to learn more about what is happening. The Grizzly bear population in the areas surrounding Yellowstone have exploded. They have more than reached their ideal population number and are expanding their range from the Yellowstone area to private property. These Wyoming ranchers reported dealing with more than simply having to co-exist with an apex predator.
What they relayed to us is chilling both from the perspective of private property ownership and animal welfare considering that grizzly bears in the area are acting in unnatural ways. To make matters worse, younger bears are learning the same behaviors. The bottom line is that grizzly bears are being protected over human and private property rights.

In addition to preying on livestock, grizzly bears have developed unnatural behaviors and are going on killing sprees. They are roaming onto ranches killing large numbers of livestock for food and for sport. They are roaming onto ranch homesteads scavenging in garages and barns and coming within near feet of houses. They are also roaming into campgrounds and small communities. In addition to their devastating impact on livestock, grizzlies have been killing hikers and tourists. Recently a woman on a cross country bike trip was pulled out of her tent and killed.

An article in the Powell Tribune reported:
“By July 1, seven people were attacked and injured by grizzly bears in the Greater Yellowstone Ecosystem —more than the first six months of any other year since data began being collected in 1992,”
“This is a higher total than six of the previous 10 years and [an] unsettling trend since over 80% of the conflicts generally occur in the second half of the year.”

Continue reading at Protect the Harvest