At Christmas time, we recognize the sacred reason for the season that has been appointed by tradition to celebrate the birth of the Son of God.  Glory to God in the highest for the gift of His Only Begotten Son, Jesus Christ.

The story of Christ’s birth and ministry is the greatest story ever told. Nothing else can compare.  We can add nothing to that sacred story.

During this Christmas season, however, we note that Christmas service and sacrifice takes many different forms. The story we wish to share is one of Christmas courage, leadership, service and extreme sacrifice that turned the tide of the American Revolutionary War of Independence.

December 1776 was a desperate time for George Washington and the American Revolution. The ragtag Continental Army was encamped along the Pennsylvania shore of the Delaware River exhausted, demoralized and uncertain of its future. The troubles had begun the previous August when British and Hessian mercenary troops invaded Long Island routing the colonial forces, forcing a desperate escape to the island of Manhattan. The British followed up their victory with an attack on Manhattan that compelled the Americans to again retreat, this time across the Hudson River to New Jersey.

The British followed in hot pursuit, chasing the Americans through New Jersey and by December had forced the Continental Army to abandon the state and cross the Delaware into Pennsylvania. With New Jersey in their firm control and Rhode Island successfully occupied, the British were confident that the Revolution had been crushed. The Continental Army appeared to be merely an annoyance soon to be swatted into oblivion like a bothersome bee at a picnic.

To compound Washington’s problems, the enlistments of a majority of the militias under his command were due to expire at the end of the month and the troops would be returning to their homes. Washington had to do something and quickly. General George Washington’s commitment to cross the Delaware River on Christmas 1776 foreshadowed the many hardships faced as well as the eventual victory of the Continental Army during the American Revolution. At first glance, the decision to transport 2,400 Continental soldiers across an icy river in one night, directly into a severe winter storm of sleet and snow seems irrational.

Washington’s decision, however, was based on strategic motivation, understanding that the Continental Army desperately needed a victory after months of intense fighting with several significant defeats and no major victories. Washington also understood that the element of surprise was the only way that he and his army stood a chance of defeating the highly trained Hessian mercenaries.

On the morning of December 25, 1776, Continental soldiers woke up in their camps along the Delaware River to a frozen, snowy covered ground. Weather conditions worsened and temperatures continued to drop throughout the day. Late in the afternoon, the Continentals left their tents and began to form along the river in anticipation of the night’s events. Washington kept almost all of the details of the crossing a secret; as a result, none of the soldiers knew anything about their upcoming mission.

Washington’s plan was to cross the river at night, march to the nearby town of Trenton, New Jersey, and attack the Hessian garrison right before dawn. Time was Washington’s greatest e 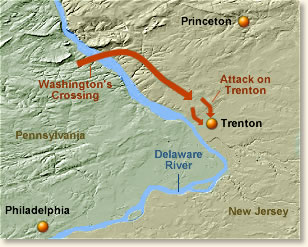 nemy; to combat it his orders called for the various regiments to assemble at their designated crossing points no later than sunset. The close proximity to the crossing points allowed the soldiers to begin the journey immediately after nightfall struck and complete the crossing no later than midnight. Once across, Washington intended for the armies to reassemble and march approximately ten miles to Trenton, arriving there no later than five o’clock in the morning to achieve surprise. Despite his meticulous planning, the schedule failed almost before it even began.

The weather was horrendous and the river treacherous. Raging winds combined with snow, sleet and rain to produce almost impossible conditions. To add to the difficulties, a significant number of Washington’s force marched through the snow without shoes.

Many of the regiments did not arrive at the river until well after dark. Additionally, a severe winter storm that included wind, rain, snow, hail, and sleet met the soldiers at the banks of the river significantly slowing their crossing. Many of the boats had to combat ice jams and unfavorable currents. To make matters even worse, the extreme darkness caused by the storm made it hard for the boatmen to see the opposite shore.

The necessity of using larger ferries to carry pieces of artillery across the river caused even more delays. Washington crossed the river with John Glover’s Marblehead mariners and upon arrival debated whether or not to cancel the entire operation because it was more than three hours behind schedule. Washington decided it was too costly to retreat and he painfully watched as his army continued to trickle across the river.

The freezing and tired Continental Army assembled on the Jersey shore without any major debacles. Once ready, Washington led his army on the road to Trenton. They attacked to the south, taking the Hessian garrison by surprise and over-running the town. After fierce fighting, and the loss of their commander, the Hessians surrendered. The victory at Trenton was the the Continental Army’s first major military victory of the war.  Without the determination, resiliency, and leadership exhibited by Washington while crossing the Delaware River the victory at Trenton would not have been possible. Although Washington’s victory was complete, his situation remained precarious. The violent weather continued – making a strike towards Princeton problematic. Washington and his commanding officers decided to retrace their steps across the Delaware taking their Hessian prisoners with them.

The news of the American victory spread rapidly through the colonies reinvigorating the failing spirit of the Revolution. The battle’s outcome also gave Washington and his officers the confidence to mount another campaign. On December 30 they again crossed the Delaware, attacked and won another victory at Trenton on January 2, and then pushed on to Princeton defeating the British there on January 3.

Although not apparent at the time, these battles were a decisive turning point in the Revolution. The victories pulled the languishing Revolution out of the depths of despair, galvanized colonial support, shocked the British and convinced potential allies such as France, Holland and Spain, that the Continental Army was a force to be reckoned with.