SALT LAKE CITY — According to an article written by Amy Joi O’Donoghue, published on ksl.com, multiple Utah entities that include the Utah agriculture department and school trust land managers say a recently approved BLM plan for removing wild horses does not go far enough and will take too much time.

Too many horses, they argue, render vast swaths of land useless by destroying the vegetation and landscape to the peril of other animals.

Instead, the groups want the “permanent and immediate” removal of nearly 700 wild horses in the Bible Springs complex in western Iron and Beaver counties to be carried out this year so numbers are brought to low as 80, especially contemplating reproductive rates for the horses that remain.

“Failing to remove the excess wild horses immediately could result in the BLM having to remove more than triple the number of horses as indicated by the chart prepared by Iron County,” the groups wrote, adding the chart projects a 361 percent increase in wild horse numbers by 2024.

In fact, in one segment of that herd management area, the Public Lands Policy Coordination Office, joined by the agriculture department and the School and Institutional Trust Lands Administration, are urging the land management agency to adhere to its agreement with SITLA to have no wild horses on the land.

Commissioners in Iron and Beaver counties had said the extra horses needed to be gone by July 1.

Iron County Commissioner David Miller said, “We’re mad, we are disappointed, we are frustrated that the BLM isn’t doing that job.”

Commissioners said they realize they can’t do much without Congress’s help.

“We were recently in D.C. and it settled in on us that this is a real political problem, and we need to find the political solutions,” Miller said.

The St. George Spectrum reports Rep. Chris Stewart, R-Utah, plans to introduce a bill that would turn the management of wild horses over to the states.

The commissioners said the BLM is breaking the law by allowing overpopulation of horses, but commissioners will not break the law to do something about it.

The commissioners have said they have the right, under Utah law, to take care of the horses themselves, but the federal government may not see it that way.

BLM Utah Director Juan Palma has said the agency is anxious to fix the problem but conceded it won’t happen overnight, or even in a few months.

“It will not be resolved in a one-time gather,” Palma said. “But we feel comfortable we can resolve this over a few years to bring this to appropriate management levels.”

The group’s comments came in advance of the Monday decision by the BLM to proceed with a plan that includes wild horse gathers and the application of fertility drugs.

Kim Christy, deputy director of the school trust lands administration, gave the entity’s board of trustees an update on the wild horse situation in Iron and Beaver counties at its Thursday meeting, but noted poor rangeland conditions and local frustrations are felt statewide.

Ultimately, the overpopulation of the horses combined with drought is reducing the amount of forage available for cattle on federal, state and private lands where they may wander, Christy said.

“The resource degradation issue is substantial,” he said. “Horses, if not managed properly, can turn rangeland into moonscape.”

The BLM, which has Washington, D.C., approval for a small gather at Bible Springs in late July and also plans to remove some wild horses causing a public health hazard on a state highway, prepared an environmental analysis to remove nearly 700 horses over a six- to 10-year period until the numbers hit the desired management level of between 80 and 170 animals.

In its own analysis, the agency said drought has reduced forage drastically. Over the past 10 years, actual livestock use within herd management areas has been substantially reduced or eliminated altogether during drought, but the agency has been limited by its own resources to conduct gathers to reduce wild horse animals. Adding to that challenge is that national holding pens are at their limits, hosting close to 33,000 animals.

Throughout southern Utah and elsewhere in the state, the drying conditions are forcing movement of the animals into “non-herd” areas, such as the SITLA land, which makes up 43 percent of the Blawn Walsh herd management area and was obtained through a land exchange with the BLM.

The BLM notes that 14 wild horses in the area succumbed to drought last summer.

Kevin Carter, executive director of SITLA, said the agency has no authority to remove the wild horses and has to wait on BLM action to evict them from property where livestock grazing should be happening, and raising revenue for the school trust.

“They are legally responsible to remove them. We do not have the authority,” Carter told the board.

Pressure on the BLM brought by the public and wild horse advocates has left the agency in a “political and legal boondoggle” that has nearly stymied the agency’s ability to respond, Christy noted.

The BLM received an estimated 26,000 comments on its roundup proposal for the Bible Springs complex, he added, with 168 in favor and the rest largely the result of an organized letter writing campaign. 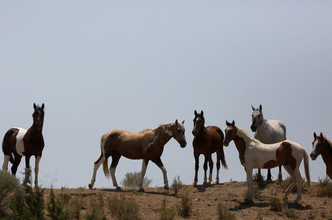 Wild horses roam in the Cedar Mountain range on Thursday, July 18, 2013. A Bureau of Land Management proposal to remove excess wild horses from Iron and Beaver counties over a six- to 10-year period has been met with disapproval from a number of Utah agencies who say the plan is inadequate. (Photo: Kristin Murphy, Deseret News)

“That goes to show the passion that exists,” Christy said. “They are construed as a national symbol of the West, perhaps properly so, but while it is true they may have a niche, for crying out loud they have to be managed properly.”

Frustration over BLM inaction hit fervent levels this spring when the showdown with Nevada rancher Cliven Bundy imploded. Rural county commissioners in Utah saw “hypocrisy” in the BLM reaction to Bundy’s cattle, contrasted to its lack of movement on removing “trespassing” wild horses.

With drought continuing to intensify in the southern part of the state, board member Thomas Bachtell noted that the victims in this, too, are the horses and the years of inbreeding have also brought disastrous results.

“I’ve seen a couple of five-legged foals out there,” he said.

Dave Ure, another board member, added that he, too, has seen the ugly aftermath of a prolonged drought.

“I don’t think the public understands,” he said. “They have this picture of Black Beauty running across the land. I’ve seen new foals that are dropping over, their ribs sticking out.”

Earlier this month, wild horse advocates petitioned Interior Secretary Sally Jewell and the U.S. Fish and Wildlife Service to list the wild horse as an endangered species, noting its rangeland has decreased 40 percent since the Wild Horse and Burro Act was passed in 1971. The only other “wild horse” herds in the world are that of Asian Przewalski in Mongolia, the petition noted, which number 300.

That approach, the state entities argued, is entirely inadequate.